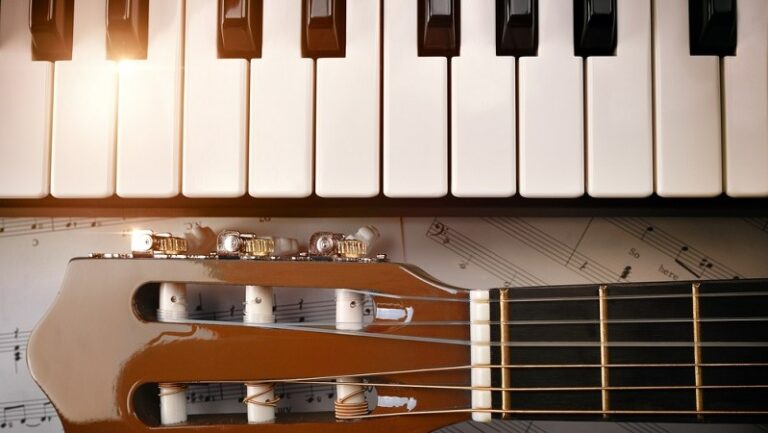 Which Instrument Is Best for You: Guitar vs Piano? It is one of the most often asked questions in the world. Almost all types of music rely heavily on these two instruments, which explains their popularity. While the Piano is a more classical instrument, the Guitar has a more modern sound.

The Piano is often seen as a complete instrument, although the Guitar complements the voice beautifully. Beethoven, for example, gave personality to the lovely instrument of the Piano by producing classics such as Symphony No.9. With the rise of hard rock in the 1960s and 1970s, Guitar became increasingly popular.

Many musicians have made a name for themselves in the music industry by rocking out on their guitars and pianos. You must have fantasized about playing one of these instruments as a child while watching your favorite rockstars on TV. Here, we’ll look at which one would best fit you.

Fundamental Parallels Between Guitar And Piano

The Guitar tends to have important components: a neck with strings getting manipulated with the vibrations reaching to the base or the body of the Guitar. The tension in the strings causes it to vibrate and cause sound to be produced, further enhanced by the hollow space in the Guitar.

The Piano, on the other hand, is more of a classic. It produces a more precise tone than a guitar. It’s constructed of about 230 steel strings and is supported by a sturdy metal frame. Individually, such lines with 20 different diameters corresponding to keyboard note ranges have been created for bass, treble, and tenor ranges.

The instruments are similarly similar in that they are both chromatic instruments with a diverse sound palette. A hammer from the inside strikes the strings below when a key is struck, generating a nice sound. The bridges attached to the soundboard to sustain the various strings function as transmitters, transmitting vibrations to the speaker’s numerous strings, resulting in loud noises

Which Is Easier for Beginners to Learn?

People generally believe that the Piano is easier to learn than the Guitar since remembering and practicing notes on a piano is simpler. Also, deciphering musical patterns is more accurate on Piano. The intervals between piano notes are easily determined.

Even the piano framework is well-organized and straightforward to grasp. It contains one key for each note in the music, and you can learn the melodies on a piano before learning the chords. After you’ve mastered the notes and scales, you can use them to play chords in various ways. It is also convenient in terms of music theory.

It is also convenient because The procedure is more sequential. On the other hand, the notes on the Guitar are a little more intricate. To switch between keys, we usually have to use a capo. Learning to play the Guitar properly may take more time than playing the Piano. You can easily play songs on the guitar if you’ve learned the correct chords.

One must also tune a guitar before use with the aid of a tuner. You don’t even need a capo to change the keys on a guitar if you’re talented enough. They necessitate knowledge of music reading via classical arrangements, which are likewise present in Piano. However, guitars differ in that there are more current notes, and knowing a chord by itself is insufficient. To strum the chords and create the sound utilized in music composition, you must be familiar with the rhythm.

Which Of The Instruments Is Less Expensive?

G guitars have become more affordable over time because of the competition between offline and internet merchants. A beginning guitar ranges in price from $100 to $200. However, it is recommended that you play the Guitar before purchasing one.

Guitars priced between $300 and $500 have improved sound quality. However, pianos are not cheap. Digital pianos range in price from $500 to $1500, while acoustic pianos start at $1500. However, if you are new to playing the Piano, you can start with a beginner keyboard, which starts at $100.

The keyboards are portable and can also generate sounds from various instruments. They contain buttons for changing the melody, bass, volume, etc.

If you want to buy a piano or a guitar but aren’t sure which is the best instrument for you, consider your favorite genre of music. You can listen to Piano in a variety of music genres, although pop music is usually the most popular.

Because of its long history of affiliation with classical music, those who enjoy it are more likely to favor a piano over a guitar. On the other hand, Rock fans are more likely to be guitar fans than piano aficionados. This is due to the rock music genre. It has always been most strongly associated with the Guitar. Furthermore, the acoustic Guitar has been linked to numerous musical genres.

The Importance Of Fingerpicking Ability When Playing Guitar Or Piano

When fingerpicking on the instrument, your right hand’s position should be focused on playing it the best. Employ the main fingers on the string on the bass. G string should be played with the index fingers, and the B string is best played with your middle fingers. The E string tends to be best strummed through the ring finger.

To get the best results, use both your thumb and fingers at the same time. The rolling method is a more difficult and taxing exercise. This includes moving your finger up and down while playing a chord, and it takes practice to get excellent at it.

You can practice your speed by playing the metronome. This helps you perfect the technique, which may be applied to any chord. Fingerpicking may create irritation in the form of calluses in your fingers at first. While these clauses may be unpleasant at first, your fingers will ultimately adjust, allowing you to pluck your guitar notes and easily create a melodic symphony.

To play more comfortably when fingerpicking on the Piano, you must position your finger correctly, in such a way that the sound is nice. It is best to maintain your fingers not too flat and your knuckles not too tight. To avoid hesitation while playing the keys, keep your elbows, arms, and shoulders relaxed.

Which Instrument Is More Convenient?

As we all know, a guitar is an instrument that everyone enjoys listening to and playing. Because it is one of the most well-known musical instruments, you can always find other guitarists to jam with. Although the Guitar is not a small instrument, it is incredibly portable and may be transported anywhere in a guitar bag.

In comparison, the Piano, a very professional-based instrument, is fairly difficult to maneuver because it is played primarily by setting; Being positioned on the stand. Although there are a few portable variants available, most of them are unlikely to be mobile enough.

Thus, guitars outperform the Piano in terms of portability, as the Guitar is more widely available and consumer-friendly. Guitars are a popular camping accessory, and taking a guitar to a party makes you the life of the party.

Which instrument provides more gratification, the Guitar or the Piano?

Most individuals believe that the Piano provides more immediate gratification than the Guitar. It is expected by the audience that it will generate a pleasing sound because it entails all simple things like sitting up straight, positioning your wrists directly, making the delicate movement of your fingers, and pushing a key. However, when a piano note is performed with fingers and hands, the variation in rhythmical independence appears to make the Piano slightly difficult.

Guitar students absorb chords and melodies faster than pianists. To learn how to play the guitar, you must first learn how to pluck and fret the strings without distorting the sound. In contrast, two hands are not used immediately when learning to play the Piano.

When piano students attain coordination, their learning will be delayed because they play several chords and melodies with hand movements.

Which Is Better For Playing In Musical Events?

The Guitar is an enjoyable instrument; most people choose acoustic and electric guitars when participating in a musical event. The Guitar matches any rate of rhythm and pace, while being known for its higher mobility and is less cumbersome.

You can only play a certain amount of sounds and musical genres in classical instruments. However, in Piano, you can reprogram it to create different types of sounds where it is electronic or even adopt the sound of other methods. Henceforth, deciding between the two often depends on the musical genre requirement.

Genres That Work Best With Piano And Guitar?

Since the inception of modern music, the Guitar has managed to be a part of many mainstream genres such as jazz, pop, soul, and many more.

The Guitars tend to be a highly vital part of the band’s music, and with electronic sounds, they are often directly connected to the large speaker set. Many soloists use guitars to create soulful music and be a one-person band with light-hearted music. Versions without a plug. It may accommodate a variety of genres, whether the topic is sad, joyous, cheerful, or mournful.

When it comes to Piano, classical music is the most well-known and established type. Orchestra is another popular environment for playing the Piano. The Piano, being a very flexible and popular instrument, makes its presence felt, from classical to jazz.

Other members of the band frequently accompany piano players, allowing the Piano to provide the foundation and spirit of the music. The rest of the band, on the other hand, serves as an accompaniment.

Which is more versatile, the Piano or the Guitar?

Which do you think is more adaptable? It is widely acknowledged in American music that these two instruments have the greatest potential for growth & fashion. They are both capable of playing in unison, alone, and in a variety of other settings.

The Piano can certainly be played with two hands, implying that it can accomplish much more, but it falls short in some ways when compared to the Guitar.

A piano cannot bend notes or use vibration. In terms of musicianship and playing, it cannot be percussive like a guitar. Piano includes extra options for accompaniment and concordance. Both can use effects to alter their sound and so on.

Some individuals say that a piano can play impossible chords on the Guitar and has a wider range than a guitar. People and some artists, on the other hand, continue to feel that the electric and acoustic guitars have a wider range.

As stated by most musicians, the Guitar offers a plethora of opportunities for ‘breaking the rules.’ Vibrato, tapping, harmonics, muting, hammer-ons, pull-offs, percussive styles, and many other methods are available to guitarists. As a result, if you offer the identical set of notes to two guitarists, you might expect to hear two quite distinct musical works.

No other acoustic instrument can equal the power, depth, and versatility of a piano, which has 88 keys covering seven octaves. The Piano transforms young and old, novice and seasoned, into performers from the time the first key is pushed, from the most simple melody to the most complicated harmonies and contrapuntal surfaces.

You have now gained knowledge of Which Instrument Is Best for You: Guitar or Piano? They tend to be highly adaptable and utilized to execute various musical styles. Overall, both devices provide a dynamic and relaxing audio experience. The comparisons in the preceding essay are pretty illuminating, and it should be clear which instruments best suit your needs. Your choice should depend on the genre, budget, and whether you have the tenacity to spend the necessary effort learning an instrument.

Ultimately being talented in any musical instrument will help you be part of various projects and impress your peers with your talent. One can now play or compose music close to their feelings and touch others’ hearts.